Is Nature Really for Everyone? 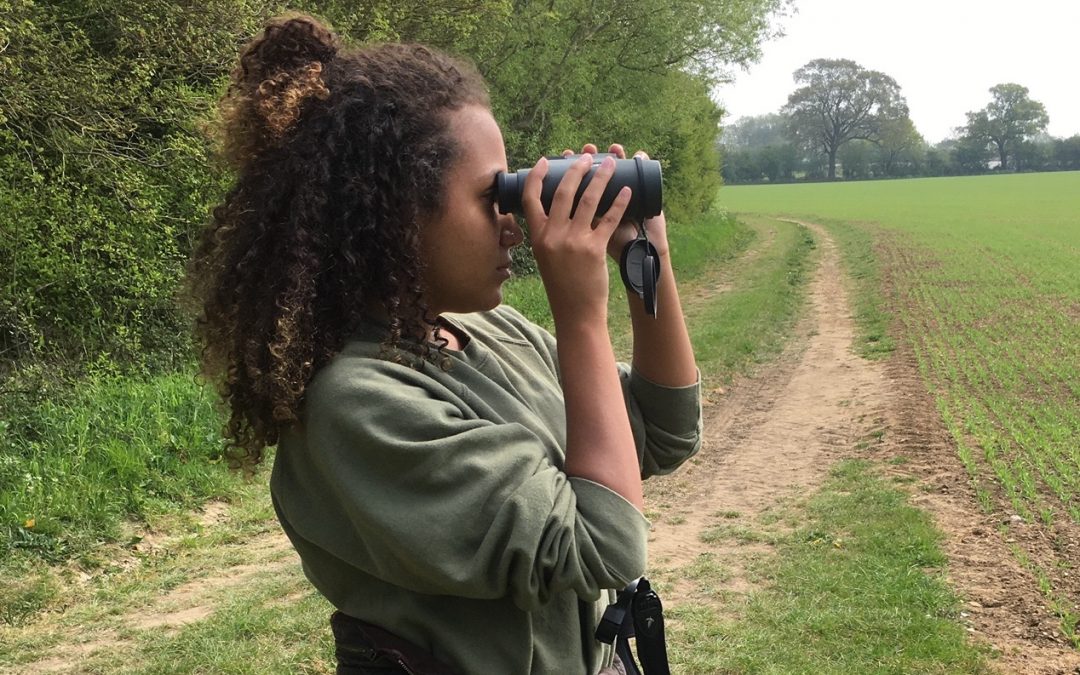 My earliest memory of experiencing wildlife was when my family and I moved from busy Hertfordshire up to the rural Suffolk Countryside. I cannot remember a time in my life when I was outdoors more; building dens and climbing trees. The first time I saw a fox was after a long day trip, returning to the house at dusk, and he stood on the drive gazing into the headlights… I was transfixed, and immediately fell in love with all that was wild.

As I grew up, all I wanted to do was to work amongst nature. However, it was only when I reached university that I realised … that I was one of the only black people choosing a career in an environmental subject.

It was hard to ignore the obvious difference between the numbers of white compared to the number of black students. And this pattern continued to repeat itself as I progressed within the conservation sector, as well as when I visited nature reserves or took part in wildlife events.

I usually found myself to be the only black person in attendance. Whilst the atmosphere was generally polite at these venues, I could not help but feel slightly isolated and different from my peers, or perhaps that I​ had ​made the wrong decisions when thinking about my career. I couldn’t explain why this came up again and again.  Doing some research, and attending events specifically about diversity in this sector, I realised I was not the only one who had noticed this. It became clear that barriers take shape in many different forms such as socioeconomic status or location, which can often lead to minorities being unable to experience nature in the same way as a white British, middle-class person may do for example.

I have frequently spoken with other VME (visual minority ethnic) nature enthusiasts, who have shared their experiences of discrimination whilst out in the field. Such stories included examples of microaggressions and overt prejudice, which often lead to that individual not feeling welcome or that they didn’t belong. I was interested to know if such experiences would influence that person’s likelihood to return or attend a similar event, join a naturalists club, and visit wildlife reserves. More often than not, that person felt like it was not worth repeating the negative experience again. This is something I have experienced many times, often in forms of microaggressions.  I get the impression that my presence at a nature reserve is something to be met with suspicion, despite me clearly holding binoculars and a field guide. I occasionally bird-watch at the weekend with my (white) partner. If we are ever spoken to by any of the surrounding birdwatchers, asking us what we have seen etc., these queries are usually directed towards my partner and that I am merely there because he has ‘dragged me along’ for the ride.

It is often said, and quite rightly, that nature is for everyone. However I cannot ignore the opportunities my parents presented to me, with encouragement to spend time outdoors, and holidays to Scotland, Devon and Cornwall, which have all fueled my love for wildlife. In essence, I realised that nature is only for everyone who is privileged enough to access it. And if they can access it, are they made to feel welcome?

It can be easy to detach ourselves from the rest of the world. Some consider #BlackBirdersWeek to be more of an ‘American” movement , and I have frequently seen the same comments come up again and again. Phrases such as “I ​don’t think there is a problem at all”​. Or that raising awareness is “​creating a problem out of thin air”.​ Or that such subjects have “​no place in nature”​. Or that they “​don’t see colour – everyone is equal, so surely pointing out race causes a further divide..?”​. These attitudes I find completely dismiss many people’s personal lived experiences. The stories that have been shared from Black Birders Week alone have highlighted there is a problem, let alone the visible lack of diversity in the conservation sector. Dismissing these stories or refusing to try and understand, gives a strong sense of belittling which further enhances the problem.

I feel it is important for the UK bird and conservation communities to recognise that there is still a noticeable lack of diversity in the sector here as well and that we need to raise awareness of this.

I am so greatful for #BlackBirdersWeek and to be part of a wonderful community. As a black woman, I feel now more than ever we need more diversity and representation in the environmental sector. Change will start with a support from EVERYONE. #BlackWomenWhoBird✊🏽🙌🏽 🌻 pic.twitter.com/pGhyUdLOAA

Creating an inclusive environment is not a simple task, and for some, can be difficult, and even uncomfortable to address. Nevertheless, we must face it head on and address it all the same. So what can people do? Well, it is easy for organisations to make empty promises, to tick boxes, or to achieve the “correct” ratio of VME to white employees. This I feel is the wrong way of going about the problem, and is clearly ‘tokenistic’. Organisations firstly need to be willing to show empathy, and to listen and learn – to actually reach out to minorities and ask what they could be doing to improve diversity and what they could do to be more inclusive. This includes individuals from within an organisation speaking out rather than just hiding behind corporate statements and social media posts.

As individuals going about our daily lives, we must be empathetic, and really listen to each other’s stories. These stories can broaden our understanding and allow us to connect. It is easy to share something on social media to show you support Black Lives Matter or  #BlackBirdersWeek. But tomorrow, will you be just as engaged? Will you continue to have these conversations, difficult though they may be, to raise awareness? Are you asking organisations within the sector how they are making a difference? When it comes to real change, your ability to listen and learn shows you are not just following a trend, that you are using your voice to influence.

I am by no means an expert on the subject of diversity. Most of what I have learnt about discrimination I have had to learn on my own, as I grew up in a predominately white area, and was brought up by my white mother. It was hard to really connect with my heritage, and I often had moments where I felt conflicted about my identity, and distant from communities that represented me. During the recent #BlackBirdersWeek and Black History Month last October, I felt an overwhelming sense of guilt and grief; like I should be doing more to promote diversity as a mixed-race individual. And that whilst my voice is one of many, it is still important to speak out.

However, while this can be quite isolating, I do feel motivated to carry on and encourage each other’s promotion of diversity . We need to push for open conversations about this problem, as it will need the collective voices of EVERYONE (not just the VME community) to come together and listen, in order to come to a solution.

Bird Life International – There is no place for racism in birding