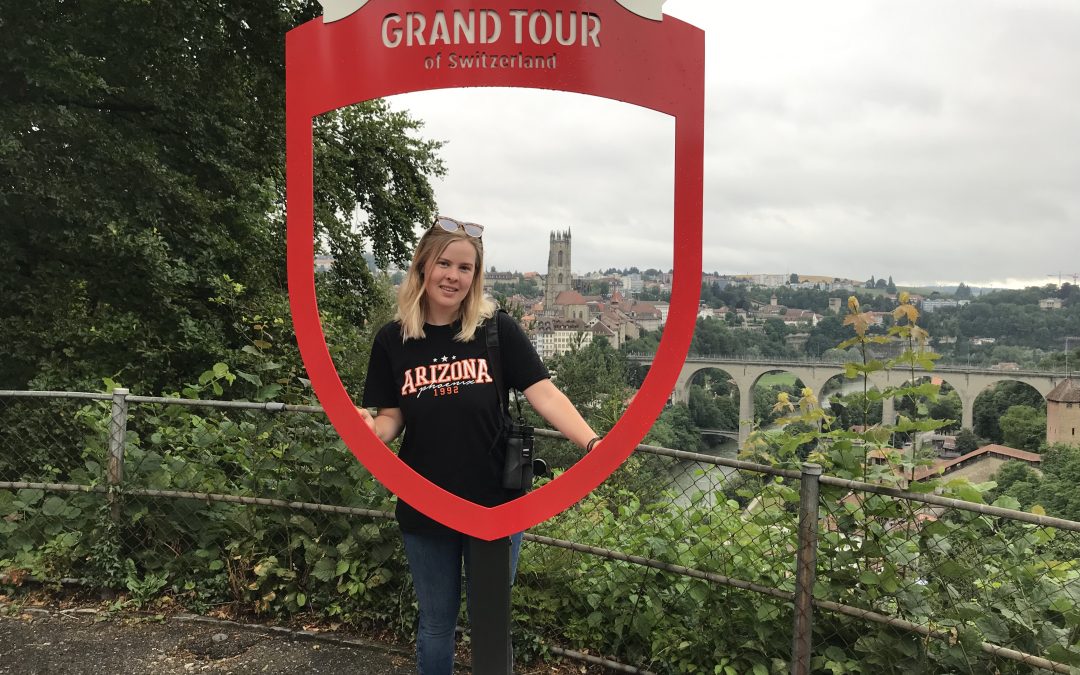 Like most people living in Rutland, or anywhere in fact which is lucky to have Ospreys breeding nearby, I am a huge fan of this masked raptor. They are so unique among birds of prey, especially in the UK, both in appearance and ecology, and since their successful return to England have inspired thought about further reintroductions.

My experience with Ospreys prior to this June was with the Rutland Osprey Project’s monitoring shifts at their beautiful Waderscrape hide. These shifts require careful observation of the Manton Bay nest, which this year has successfully raised 4 young; quite an achievement! Any feeds, intruders and other activity is noted, and as any volunteer who has done one of these shifts will tell you, you soon learn a lot about osprey behaviour. This experience left me wanting to know more about how the Ospreys were first brought to Rutland, and with other projects such as the Poole Harbour Osprey Project and the immensely exciting Isle of Wight White-Tailed Eagle re-introductions, I wanted to know how this kind of conservation works.

When the Osprey Leadership Foundation first got in touch about joining their Stars of the Future Scheme, they asked me what kind of experience I was looking for in order to help me establish a career in conservation. For a student like myself who is in the process of forging a skill set to improve my employability when I graduate, this was like a golden ticket! Among other things I was keen to express an interest in learning, I made sure to put experience of an active re-introduction project. Sure enough, a few weeks later I received an email from Tim with some information about a project in Switzerland, along with an email to contact. Not long after, I had flights and trains booked to take me to Geneva, then into the Swiss countryside to the Projet Balbuzard site for 3 weeks volunteering.

I have never been to Switzerland before, and my French is far from fluent, so I was a little hesitant to start with, but this was far outweighed by excitement to see a project which mirrors what Rutland looked like 20 years ago; no existing breeding population of Ospreys, some released, and awaiting returns from migration.

I arrived at Neuchatel train station at almost midnight on the 24th June, greeted by Marine (project assistant for the season) and Christine (involved with the project since the beginning). Luckily Marine’s English was very good, and by the time I was in bed I felt very re-assured that my time in Switzerland was going to be spent well.

The young ospreys for this year’s translocation arrived from Germany on the Wednesday after I arrived at the site, which meant I had just over a day to be shown around and visit some good spots for seeing any ospreys which had returned from migration. I was told that one, named Fusée (rocket) had been seen earlier on in the summer, so we scanned lake edges but to no avail. One thing we did see was a lot of mosquitos, which left me covered in welts for a week! That taught me to make sure I had repellant on…

On Wednesday 27th June, the German birds arrived and the work began. Wendy Strahm and her husband Denis had driven the birds from Zurich airport having spent time scouting out suitable nests in Germany and looking after the collected chicks before their massive journey to new horizons. Before going into their aviaries, the chicks were given a hand-fed meal, had their rings checked and photos taken. The weather was incredibly hot that day and the week afterwards, which meant it was a struggle to make sure the birds fed, but with regular showers and slowly cooling weather, the birds were soon eating a lot of fish.

Once the 6 birds had arrived it was all hands on deck to ensure they were monitored and kept well fed. A typical day on the project consisted of waking up early, going to check the birds and giving them their morning feed of 200g of chopped fish. We checked them from a cabin a few hundred metres from the aviaries which had 9 live camera feeds; 6 in the birds aviaries, and 3 at various angles outside the aviaries. ‘Checking’ means looking at what time they fed, who fed, and if anything else has happened whilst we were not watching, such as wing exercise and, the most exciting, first perch. We also looked out for ‘Taurus’, or PS7, a returning individual who had returned to the release site and was showing an immense interest in the chicks in the cages; we often wondered whether he understood that they will soon be released like he was a couple of years ago. Unfortunately I left a few days before the first birds were going to be released, it would have been really interesting to see how they interacted with this adult who had migrated and returned to his ‘home’!

Once we were sure the Ospreys were okay, we would have to chop up some fresh fish and sort the meat into boxes with 200g in each and make sure there were no large bones which could be a choking hazard. The first week was harder work as there was just 2 of us doing work which was usually spread between 4 working in 2 pairs; once we were a complete team the fish would be cut whilst the Ospreys were monitored, then we would swap in the afternoon. We finished monitoring at 8pm for dinner, and then would go back to the aviaries after dark to change the food plates, clean the dirty ones and put fresh food in ready for the morning. Every time we fed the birds, we also needed to clean the boxes ready to be filled up again with freshly chopped fish. I do wonder how many fish I cut up in the 3 weeks I was there, and also if my sense of smell will ever be the same again!

We had gotten into a really good routine with the German birds, and then a week and a half later we had 6 more birds join, this time from Norway. These birds arrived later on in the evening, so the feeding and checks were done in dim light, but I am sure this kept the birds calmer. The day after the Norwegian birds had been put into the aviaries, we were astonished at the amount of food they had eaten; compared to the German birds these ones were positively ravenous! This is good though; Wendy had told me that they get through a lot of fish once there are 12 all feeding well. This did however put a strain on the fish supplies, so we had to make sure we had enough fishermen on hand to provide enough fresh fish, although Wendy handled this very well.

One of my favourite parts about the volunteer role was the monitoring of the chicks on the webcams, because, like the shifts at Rutland Water, you soon get to know the birds as individuals, and the habits of the species too. We named the birds in the aviaries to help distinguish the 2 for monitoring who has fed, and did so based on the markings on the back of their heads. Ospreys have unique patterns on the backs of their heads, so using the webcams we could identify which chick was which. The first we named was Cèpe, because of a very clear mushroom shape on the back of his head which we all agreed on, however the rest were a little bit more tricky. When I left to come home the Norwegian birds had yet to be named fully, so I look forward to seeing what they will be called!

I couldn’t believe how quickly the German birds had developed in the week and a half they were with us before the Norwegian birds arrived; looking at the webcams there was such a clear divide in development between the two batches. In the older German group, there were birds already behaving a lot like adults, perching and even starting to eat full fish, and in the Norwegian group the birds were not only smaller and more reptilian looking, but sitting on their tarsus and not exploring much further than the nest mould. Just 10 days make such a difference in an Osprey’s development, it is such a pivotal time in their life as they learn about the world around them and how to navigate it as an Osprey. It is even more incredible to think that in just a couple of months, all being well, these birds would be embarking on a journey thousands of miles long to their wintering grounds, a phenomenon which is still little understood and still blows my mind.

My time in Switzerland absolutely flew by as I was enjoying it so much. In the last couple of days I was also able to explore Switzerland a bit thanks to the kindness of the people involved with the project. Denis showed me around some of the nest locations surrounding the release site, where impressively constructed nest baskets have been built onto the top of Scots pines in locations where the nest is well concealed from view. Denis explained to me that the problem with finding a good nest locations for Ospreys in Switzerland is that there are so many tracks going through forests that, even if a really good tree is identified, it will probably be somewhere that the birds will get disturbed. Added to this, the rarity of Ospreys in Switzerland at the minute would mean that a nesting pair visible from a short distance from the nest would draw photographers and birders wanting to get a closer look. This is also a risk with the release site, so volunteers in the next few weeks will be on hyper-alert to make sure that the released birds are not disturbed whilst they explore outside of the aviaries and strengthen up before migration.

This experience has been so amazing for me, and has only added to my passion for birds of prey and their conservation. I am sure that everything I learned in Switzerland will be put to use in the future, and I have made some great connections and friends. I would like to thank Wendy, Denis and the team at Projet Balbuzard who all made me feel very welcome. I would of course also like to express my most heart-felt thanks to the Osprey Leadership Foundation and their donors, who made my trip and incredible experience possible through their generosity. I have gained so much from this, and look forward to doing more with the OLF! 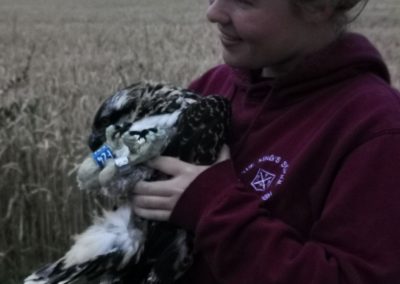 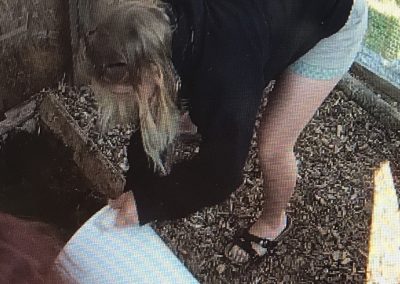 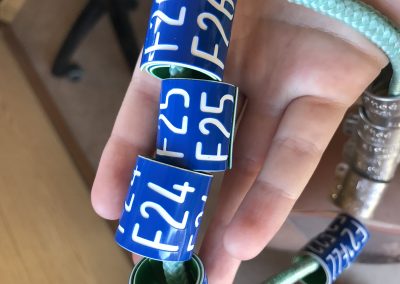 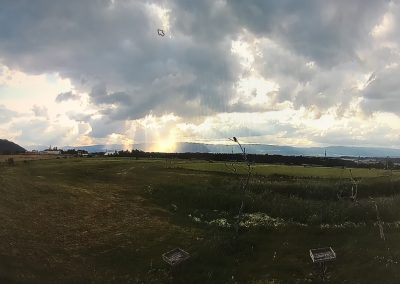 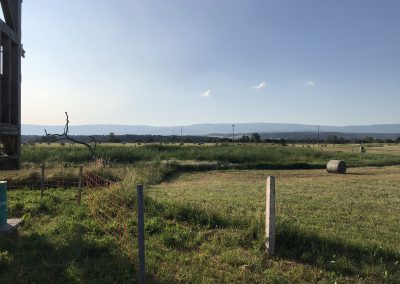