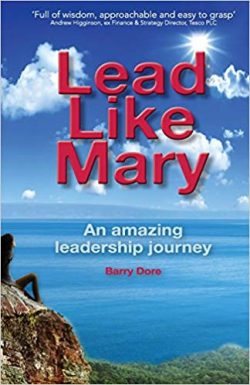 Lead Like Mary is the title of a leadership book Barry published in 2014.  It was his attempt to get down into one place the breadth of material he was already teaching on authentic leadership, so he could use it as a resource for the future development of leadership programmes.
The material is based on his experience over some forty years of many leaders; some highly effective, many good, many average, some poor and some frankly terrifying!  He tried to pick out traits he saw commonly demonstrated by the highly effective leaders, and the contra traits demonstrated by the poor ones.
What became clear is that the highly effective leaders were authentic.  By this Barry means they led those around them not through the position they held, or through threat and fear.  Instead people chose to follow them because of who they were; inspirational, focused, determined and genuine.
As he continued his study a number of common traits emerged, shared by those highly effective leaders.  He was able to develop and articulate what he believes are the ten traits consistently demonstrated by great leaders- Mary’s ten traits.
Mary is entirely a fictional character, but she is based on many of the authentic leaders Barry has been privileged to meet and to work with.
We will use Lead Like Mary as the text and bedrock for our leadership journey together for the next few weeks and beyond.  It is not essential to read the book, but it may well be valuable in helping you understand and give context to the material we explore.

If you wish to buy a copy you can purchase one online via amazon by clicking HERE.